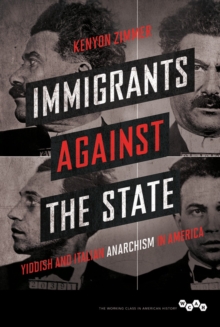 Immigrants against the state: Yiddish and Italian anarchism in America

Part of the The Working Class in American History series

From the 1880s through the 1940s, tens of thousands of first- and second-generation immigrants embraced the anarchist cause after arriving on American shores.

Kenyon Zimmer explores why these migrants turned to anarchism, and how their adoption of its ideology shaped their identities, experiences, and actions.

Tracing the movement's changing fortunes from the pre World War I era through the Spanish Civil War, Zimmer argues that anarchists, opposed to both American and Old World nationalism, severed all attachments to their nations of origin but also resisted assimilation into their host society.

Their radical cosmopolitan outlook and identity instead embraced diversity and extended solidarity across national, ethnic, and racial divides.