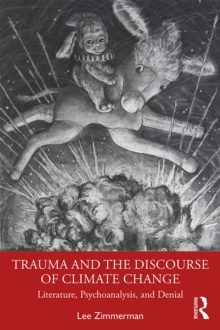 Trauma and the Discourse of Climate Change: Psychoanalysis, Literature and Denial

The more the global north has learned about the existential threat of climate change, the faster it has emitted greenhouse gases into the atmosphere. In Trauma and the Discourse of Climate Change, Lee Zimmerman thinks about why this is by examining how "climate change" has been discursively constructed, tracing how the ways we talk and write about climate change have worked to normalize a generalized, bipartisan denialism more profound than that of the overt  "denialists."

Suggesting that we understand that normalized denial as a form of cultural trauma, the book explores how the dominant ways of figuring knowledge about global warming disarticulate that knowledge from the trauma those figurations both represent and reproduce, and by which they remain inhabited and haunted. Its early chapters consider that process in representations of climate change across a range of disciplines and throughout the public sphere, including Al Gore's An Inconvenient Truth, Barack Obama's speeches and climate plans, and the 2015 Paris Agreement. Later chapters focus on  how literary representations especially, for the most part, participate in such disarticulations, and to how, in grappling  with the representational difficulties at the climate crisis's heart, some works of fiction-among them Cormac McCarthy's The Road and Russell Hoban's Riddley Walker-work against that normalized rhetorical violence. The book closes with a meditation centered on the dream of the burning child Freud sketches in The Interpretation of Dreams.

Highlighting the existential stakes of the ways we think and write about the climate, Trauma and the Discourse of Climate Change aims to offer an unfamiliar place from which to engage the astonishing quiescence of our ecocidal present. This book will be essential reading for academics and students of psychoanalysis, environmental humanities, trauma studies, literature, and environmental studies, as well as activists and others drawn to thinking about   the climate crisis.