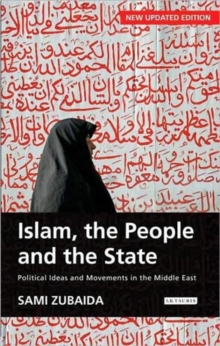 Islam, the People and the State : Political Ideas and Movements in the Middle East

The recent prominence of Islamic politics in the Middle East, has raised important questions about society, politics and culture.

It has posed a challenge to the main theoretical approaches in the social sciences from Marxism to modernization theory and it has given some credence to the idea that the world of Islam is essentially distinct from Europe, and follows a course of development dictated by its own history and culture. In this book, Sami Zubaida challenges these diverse opinions in favour of a general political sociology capable of dealing with the historical and cultural personalities of societies and situations in the region.

He argues that rather than being "revivals" of historical ideas and institutions, current political and social developments in the Islamic World are, in fact, uniquely modern phenomena. 'Packed with stimulating ideas on a wide range of topics - whether on fundamentalism, the state or society, wedding ceremonies or class analysis, theories of development or Middle East specificity.

This book is a must reading for any student of the contemporary Middle East.' - Ervand Abrahamian, author of Radical Islam: The Iranian Mujahedin, and Khomeinism: Politics and Ideology in Contemporary Iran'A fine reassessment of societies where religion seems suddenly to be the dominant ideology' - Middle East Report