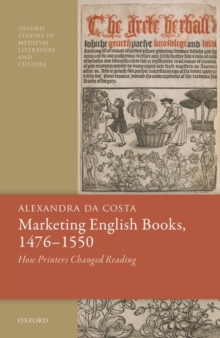 Part of the Oxford Studies in Medieval Literature and Culture series

The monograph series Oxford Studies in Medieval Literature and Culture showcases the plurilingual and multicultural quality of medieval literature and actively seeks to promote research that not only focuses on the array of subjects medievalists now pursue - in literature, theology, and philosophy, in social, political, jurisprudential, and intellectual history, the history of art, and the history of science - but also that combines these subjects productively.

Itoffers innovative studies on topics that may include, but are not limited to, manuscript and book history; languages and literatures of the global Middle Ages; race and the post-colonial; the digital humanities, media and performance; music; medicine; the history of affect and the emotions; theliterature and practices of devotion; the theory and history of gender and sexuality, ecocriticism and the environment; theories of aesthetics; medievalism. Marketing English Books is about how the earliest printers moulded demand and created new markets.

Until the advent of print, the sale of books had been primarily a bespoke trade, but printers faced a new sales challenge: how to sell hundreds of identical books to individuals, who had many other demands on their purses.

This book contends that this forced printers to think carefully about marketing and potential demand, for even if they sold through a middleman-as most did-that wholesaler, bookseller, or chapman needed to be convinced the books would attract customers.

MarketingEnglish Books sets out, therefore, to show how markets for a wide range of texts were cultivated by English printers between 1476 and 1550 within a wider, European context: devotional tracts; forbidden evangelical books; romances, gests, and bawdy tales; news; pilgrimage guides, souvenirs and advertisements;and household advice.

Through close analysis of paratexts-including title-pages, prefaces, tables of contents, envoys, colophons, and images-the book reveals the cultural impact of printers in this often overlooked period.

It argues that while print and manuscript continued alongside each other, developments in the marketing of printed texts began to change what readers read and the place of reading in their lives on a larger scale and at a faster pace than had occurred before, shaping theirexpectations, tastes, and even their practices and beliefs.