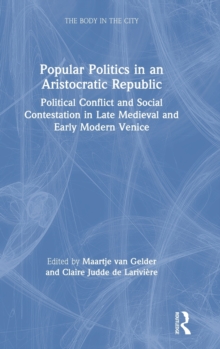 Part of the The Body in the City series

By examining popular politics in Venice as a range of acts of contestation and of constructive popular political participation, it contributes to the broader debate about premodern politics.

It innovates Venetian studies by considering how ordinary Venetians were involved in politics, and how popular politics and contestation manifested themselves in this densely populated and diverse city.

Together the chapters propose a more nuanced notion of political interactions and highlight the role that ordinary people played in shaping the city's political configuration, as well as how the authorities monitored and punished contestation. Popular Politics in an Aristocratic Republic combines recent historiographical approaches to classic themes from political, social, economic, and religious Venetian history with contributions on gender, migration, and urban space.

The volume will be essential reading for students of Venetian history, medieval and early modern Italy and Europe, political and social history.