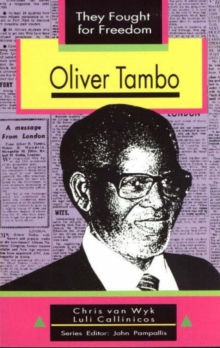 Part of the They fought for freedom series

In the 1940s, the ANC's Youth League transformed the organisation into a defiant, mass-based force that fought for freedom.

Oliver Tambo was a prominent member of that Youth League, but his most important role was still to come.

In 1960, the South African Government banned the ANC.

Tambo was appointed to continue the ANC's fight - from outside the country.

During this time, he helped strengthen the ANC's organisation and assisted in establishing underground structures inside the country. He brought the struggle for liberation in South Africa to the attention of the rest of the world and, in doing so, won the admiration and the support of all those with whom he made contact.

Thirty years later, Tambo returned to his motherland and handed the ANC back to the people, intact and triumphant.

They Fought for Freedom tells the life stories of southern African leaders who struggled for freedom and justice.

In spite of the important roles they played in the history of southern Africa, most of these leaders have been largely ignored by the history books.

The series tells their stories in an entertaining manner, in clear language and aims to restore them to their rightful place in history.