Business Book of the Year This annual Award, promoted by the Financial Times and McKinsey & Company, now in its 17th year, aims to identify the book that provides the most compelling and enjoyable insight into modern business issues, including management, finance and economics. 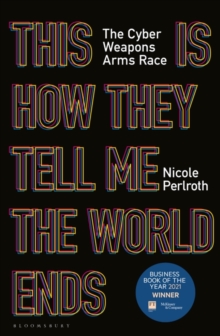 This is how they tell me the world ends : the cyber weapons arms race

New Yorker Zero day: a software bug that allows a hacker to break in and scamper through the world's computer networks invisibly until discovered. One of the most coveted tools in a spy's arsenal, a zero day has the power to tap into any iPhone, dismantle safety controls at a chemical plant and shut down the power in an entire nation - just ask the Ukraine. Zero days are the blood diamonds of the security trade, pursued by nation states, defense contractors, cybercriminals, and security defenders alike. In this market, governments aren't regulators; they are clients - paying huge sums to hackers willing to turn over gaps in the Internet, and stay silent about them. This Is How They Tell Me the World Ends is cybersecurity reporter Nicole Perlroth's discovery, unpacked. A intrepid journalist unravels an opaque, code-driven market from the outside in - encountering spies, hackers, arms dealers, mercenaries and a few unsung heroes along the way. As the stakes get higher and higher in the rush to push the world's critical infrastructure online, This Is How They Tell Me the World Ends is the urgent and alarming discovery of one of the world's most extreme threats.

The new climate war : the fight to take back our planet Mann, Michael E. Paperback

The world for sale : money, power and the traders who barter the earth's resources Blas, Javier Hardback

This is how they tell me the world ends : the cyber weapons arms race Perlroth, Nicole Paperback

The aristocracy of talent : how meritocracy made the modern world Wooldridge, Adrian Laminated

The conversation : how talking honestly about racism can transform individuals and organizations Livingston, Robert Paperback

The judges will give preference to those books whose insights and influence are most likely to stand the test of time. The winning author will receive an award of £30,000 and shortlisted authors will receive £10,000. Where a title has more than one author the prize money will be divided equally between the authors.