The British Book Awards 2021, or Nibbies, represent the best of the book trade - the UK’s leading creative industry. First launched in 1990 and now run by The Bookseller, the British Book Awards and its sister awards schemes – The British Book Award for Export and Library of the Year – showcase and celebrate the best books, the best bookshops and the best publishers. The Nibbies are unique in recognising that a book’s success is not down to just one factor. It is the author’s creative genius, it is the publisher’s skill and support and it is the bookshop’s championing. The Nibbies’ Books of the Year are unapologetically about success but not ‘just’ who is top of the bestseller lists. We want to find the best independent bookshops from rural Scotland to inner-city London. We celebrate the small presses that are such a vital part of the publishing ecosystem. We champion the best illustrators. 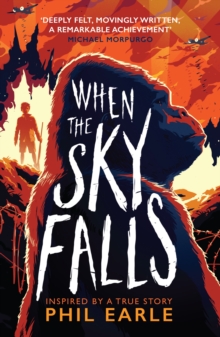 When the sky falls, or, A is for Adonis

No wonder he is angry! Bombs are raining down on the city that Joseph is sent to as an evacuee. And anyway, who came up with the stupid idea that he should live with Mrs F. who doesn’t even like children! He knows he should just run away but where would he go? Instead, he finds himself inexorably drawn into Mrs F‘s life and the zoo and the animals she is fighting to keep safe – in particular, Adonis, the powerful silverback gorilla. Every night when the bombs fall, Mrs F rushes to the zoo. She risks her life to be with her animals safe knowing that, if the very worst happens and the zoo is bombed she will have to take exceptional and radical action. Will she be brave enough? And would Joseph be? In this deeply moving story of Joseph’s journey of self-discovery Phil Earle not only tells a brilliant story of a child’s emotional development but also added an important and true dimension to World War 2 stories.

You'll be the death of me McManus, Karen M. Paperback