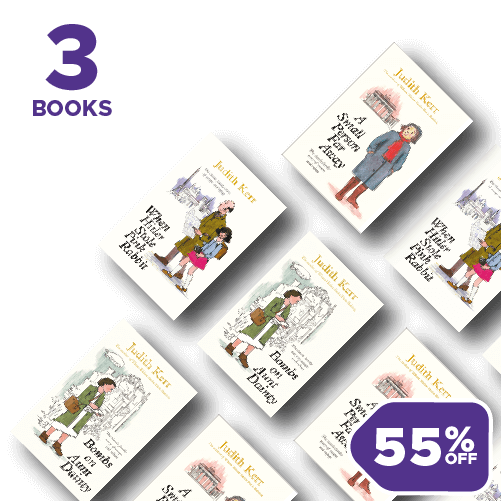 Judith Kerr is one of our most cherished authors, and Michael Morpurgo called When Hitler Stole Pink Rabbit: “The most life-enhancing book you could ever wish to read."

The three books in this collection are partly inspired by her childhood growing up during the Second World War. They’re poignant but humorous and the subtle stories introduce the rise of Hitler, World War II and the themes of prejudice to children.

When Hitler Stole Pink Rabbit is the unforgettable story of a Jewish family fleeing from Germany before the start of WWII. It finds 9-year-old Anna's father going missing. Straight away she and her brother Max are rushed away, in alarming secrecy, to a completely new place. Everything they know from Germany - home, schoolmates, toys - will now be a distant memory.

In Bombs on Aunt Dainty, Anna is a teenager and she's living in London during the Blitz. The bombs are coming from Germany - the country that was once her own. How will she and her beloved refugee family survive if Hitler does invade?

The final book in the trilogy is A Small Person Far Away. In this emotional tale, Anna has to head back to Berlin to visit her dangerously ill Mama. While there, she will have to face a past that she has shut away for so long.