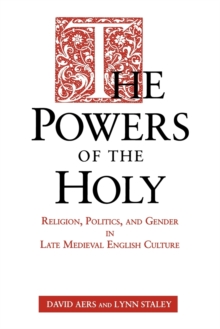 The powers of the Holy : religion, politics, and gender in late medieval English culture

""A very fine book, the fruit of an unusually seamless and effective collaboration by two prominent readers of English writing of the late-fourteenth and early-fifteenth centuries...Aers and Staley ...deliver that relatively rare thing, a book rich in scholarship and insistently, urgently challenging.""-South Atlantic Review ""The authors delineate the variable ways that late medieval representations of the holy are profoundly engaged in the politics of state, church, class, and gender. They offer innovative analyses of major authors and texts that will prove to be essential reading for medievalists in general and that will, I believe, have a salutary impact on the current rewriting of English literary history.

The significance of Aers' and Staley's major claim about the ""powers of the holy"" in late fourteenth-century English texts should not be underestimated.

It enables-in fact requires-a reframing of the standard picture of the relations between the literary and the social in late medieval England.""-Theresa Coletti, University of Maryland at College Park ""The Powers of the Holy will be read eagerly by all who are interested in the history of culture, religion, and literature, and that will stimulate vigorous debate.""-Derek Pearsall, Harvard University The Powers of the Holy explores ways in which the language and images of Christian devotion in late fourteenth-century England were inextricably bound up with a variety of social and political relations.

Addressing a wide range of texts, David Aers and Lynn Staley analyze the complex, shifting, and often extremely subtle forms in which writers responded to this situation.

Aers concentrates on representations of the humanity of Christ.

He unfolds the spiritual and political implications of different versions of the humanity of Christ composed in this period, addressing major issues of gender and power introduced into the field by Caroline Walker Bynum and others.