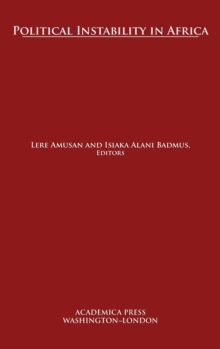 This book offers broad-gauged analyses of the causes, nature, and changing patterns of armed conflict in Africa as well as the reasons for these patterns.

It also situates conflicts that have been haunting the African continent since the time of decolonization within the various theoretical schools such as "new war," "economic war," "neo-patrimonial," and "globalization." It begins with the premise that conflict constitutes one of the major impediments to Africa's socio-economic development and has made the continent's future looks relatively bleak.

At the dawn of the twenty-first century, the international community has, once again, treated Africa as a hopeless continent.

This is due, in part, to a number of political, military, and socio-economic problems, which have made the continent miss the path towards sustainable development.

From the period of political independence in the 1960s to the immediate post-Cold War period, the African political landscape was dotted with many conflicts of different natures and intensity (low-intensity conflicts, civil wars, mass killings, and large-scale political violence).

During the first four decades of political independence, there were about 80 forceful changes of government in Sub-Saharan Africa, while a large number of countries in that region witnessed various forms of conflicts.

This collection assembles the work of distinguished African scholars who offer valuable new insights into the problem of political instability.