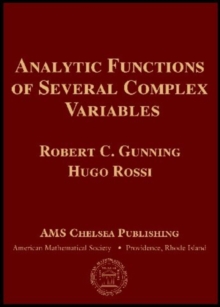 The theory of analytic functions of several complex variables enjoyed a period of remarkable development in the middle part of the twentieth century.

After initial successes by Poincare and others in the late 19th and early 20th centuries, the theory encountered obstacles that prevented it from growing quickly into an analogue of the theory for functions of one complex variable.

Beginning in the 1930s, initially through the work of Oka, then H.

Cartan, and continuing with the work of Grauert, Remmert, and others, new tools were introduced into the theory of several complex variables that resolved many of the open problems and fundamentally changed the landscape of the subject.

These tools included a central role for sheaf theory and increased uses of topology and algebra.

The book by Gunning and Rossi was the first of the modern era of the theory of several complex variables, which is distinguished by the use of these methods.

The intention of Gunning and Rossi's book is to provide an extensive introduction to the Oka-Cartan theory and some of its applications, and to the general theory of analytic spaces.

Fundamental concepts and techniques are discussed as early as possible.

The first chapter covers material suitable for a one-semester graduate course, presenting many of the central problems and techniques, often in special cases.

The later chapters give more detailed expositions of sheaf theory for analytic functions and the theory of complex analytic spaces.

Since its original publication, this book has become a classic resource for the modern approach to functions of several complex variables and the theory of analytic spaces.