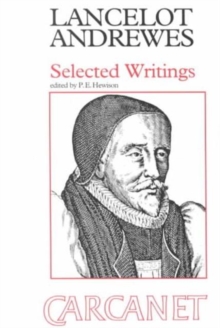 Part of the Fyfield Books series

This selection re-introduces the sermons and other work of the Elizabethan/Jacobean divine, Lancelot Andrewes (1555-1626).

In the pulpit, Andrewes initiated the metaphysical style of sermonizing - erudite, ornate, allusive, full of puns and conceits, and frequently dramatic and poetic.

Despite fame, he refused two bishoprics offered by Elizabeth I and always tried to avoid controversy.

Under James I, he became Bishop of Chichester, Ely, and finally Winchester, contributed significantly to the King James Bible, and his Devotions affected Newman and churchmen of the 19th century.

These selected writings represent a voice from early Anglicanism.