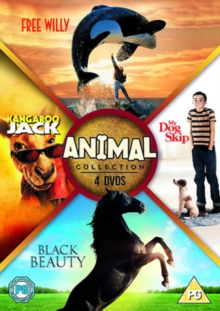 After getting a job at the park and growing closer to Willy, Jesse resolves to return his new friend to his home in the sea and reunite him with his family.

But Skip is no ordinary dog. Sensing Willie's shyness he takes him on an adventure that will change his life forever, helping Willie face up to the local bullies and turning them into his friends, as well as rekindling his friendship with soldier Dink Jenkins (Luke Wilson) and getting him a date.

In 'Kangaroo Jack' (2003) Charlie (Jerry O'Connell) and Louis (Anthony Anderson) accidentally run over a kangaroo and decide to dress it in sunglasses and Louis' jacket.

But the kangaroo wasn't killed as they imagined, and it hops away out of sight - with stolen money in his pocket, taking the two boys on a kangaroo chase around the Australian outback.

In 'Black Beauty' (1994), based on Anna Sewell's classic novel set during the late 19th century, a horse which has been badly treated tells his life story.