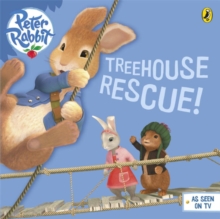 Part of the BP Animation series

Beatrix Potter's timeless character Peter Rabbit comes to life in a brand new series based on the well-loved children's books.

Mischievous, charming and brave, Peter is a hero who overcomes obstacles, outwits predators and dodges danger on his exciting adventures.

Featuring imagery in soft pastel hues and set amidst the sweeping landscapes of the Lake District, Treehouse Rescue! sees Peter and his friends embark on a brave and dangerous quest for a secret clubhouse to escape the clutches of the hungry fox, Mr Tod.

To help him on his adventures, Peter is never without his cousin Benjamin Bunny and their good friend Lily Bobtail.

Lots of their friends (and enemies) will be familiar to lovers of Beatrix Potter's timeless animal tales, such as bonkers Squirrel Nutkin, kindly Mrs Tiggy-Winkle and the scary farmer, Mr McGregor. Peter Rabbit is a character that children will be able to relate to.

To him, like them, friendship is paramount and he is never far away from fun, mischief and adventure.

There are so many extras in here. We've borrowed Peter's secret notebook, and put his sketch of Nutkin's crazy squirrel camp in the book too.

It's a great picture, and will take the reader right to the heart of the story.

There's also a map showing where everyone lives, and a chance to get to know the characters too.