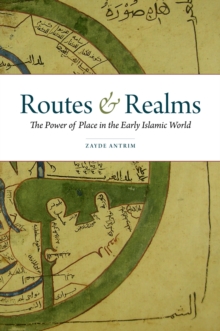 Routes and realms: the power of place in the early Islamic world

Routes and Realms explores the ways in which Muslims expressed attachment to land from the ninth through the eleventh centuries, the earliest period of intensive written production in Arabic.

The conceptual innovation at the heart of the book is its identification of a "discourse of place," a framework for approaching formal texts devoted to the representation of territory across genres.

By subjecting these works to close reading and analysis, Antrim argues that their authors imagined plots of land primarily as homes, cities, and regions and associated them with a range of claims toreligious and political authority.

The discourse of place constitutes evidence of the powerful ways in which the geographical imagination was tapped to declare loyalty and invoke belonging in the early Islamic world.

Now more than ever, when the competing forces of nationalism and globalism inspire new notions of rootedness, it is vital to ponder the changing ways in which land has mattered over the centuries.