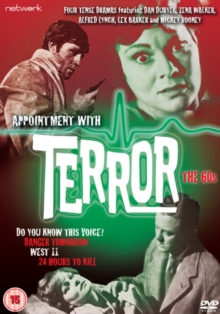 Appointment With Terror: The 60s

Collection of 1960s horror films. In 'Do You Know This Voice?' (1964), when thief and kidnapper John Hopta (Dan Duryea) accidentally kills a child whilst attempting to abduct them, he flees.

Before he does however, nosy neighbour Rosa (Isa Miranda) manages to catch a glimpse of his shoes under the door.

With only a small lead, will Rosa and the authorities catch John before he commits another crime?

Unable to determine whether she is seeing a past event or a future one, she becomes certain that either way her life is in grave danger.

In 'West 11' (1963), the film follows Joe Beckett (Alfred Lynch), an unemployed and emotionally cold young man living in a bedsit who frequents the area's jazz clubs and coffee bars.

When Beckett is approached by a war veteran offering him the chance to earn some money by murdering his wealthy aunt, Beckett sees it as an opportunity to get rich quick.

But can Beckett really handle the ensuing guilt that follows such a heinous crime?

Finally, in '24 Hours to Kill' (1965), the crew of a jetliner runs into trouble with a gang of smugglers after being forced to spend 24 hours in Beirut.