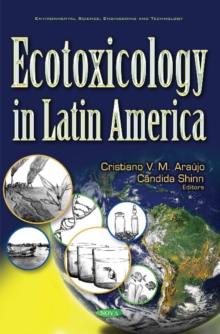 By: Araujo, Cristiano V M(Edited by),  Shinn, Candida Helena(Edited by)

Latin America is one of the most diverse but also vulnerable regions in the world that is under continuous anthropogenic pressure due to increasing urban, industrial and agricultural developments.

Although there are many research groups studying the impacts caused by those pressures, the results and conclusions obtained by many of them are largely unknown because their studies are mostly published at the local or regional scale.

This selection of topics aims at covering the most important subjects and applications of ecotoxicology, including classical and novel subjects.

It is envisioned to have an international projection within and beyond Latin American countries, as it is a great opportunity to increase the networks not only among Latin American research teams working on similar subjects, but also with teams from other regions.

The idea of this book was to favour the connection among groups to quickly improve the development of methods and their application in ecotoxicological and environmental risk studies in Latin America.

This book will be useful to important sectors of environmental sciences and related areas, and to specific target demographics such as students and researchers acting in environmental studies, and decision-makers (i.e., politicians and environmental organizations).