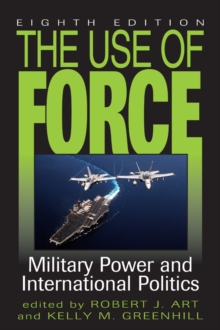 The Use of Force : Military Power and International Politics

The Use of Force, long considered a classic in its own right, brings together enduring, influential works on the role of military power in foreign policy and international politics.

Now in its eighth edition, the reader has been significantly revised; with twenty innovative and up-to-date selections, this edition is 60 percent new.

The first section includes essays that cover the security dilemma, terrorism, the sources of military doctrine, the nuclear revolution, and the fungibility of force.

A new subsection of Part I also deals with ethical issues in the use of force.

The second section includes case studies in the use of force that span the period from World War I through the war in Afghanistan.

The final section considers issues concerning the projection of US military power; the rising power of China; the spread of biological and nuclear weapons and cyberwarfare; intervention in internal conflicts and insurgencies; and possible future developments in terrorism, nuclear abolition, and robotic warfare.