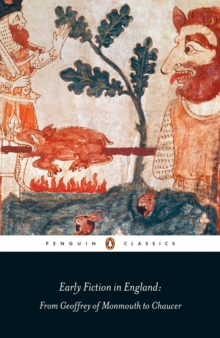 Early fiction in England : from Geoffrey of Monmouth to Chaucer

A brilliant new anthology that shows how fiction was reinvented in the twelfth century after an absence of hundreds of years.

Essential for all students of medieval literature, Early Fiction in England includes extracts by Geoffrey of Monmouth, Wace, Marie de France, Chaucer and many others, in new translations and with illuminating introductions.

Before the twelfth century, fiction had completely disappeared in Europe.

In this important and provocative book, Laura Ashe shows how English writers brought it back, composing new tales about King Arthur, his knights and other heroes and heroines in Latin, French and English.

Why did fiction disappear, and why did it come to life again to establish itself the dominant form of literature ever since? And what do we even mean by the term 'fiction'? Gathering extracts from the most important texts of the period by Wace, Marie de France, Chaucer and others, this volume offers an absorbing and surprising introduction to the earliest fiction in England. The anthology includes a general introduction by Laura Ashe, introductions to each extract, explanatory notes and other useful editorial materials.

All French and Latin texts have been newly translated, while Middle English texts include helpful glosses. Laura Ashe is a University Lecturer in English and Fellow of Worcester College, Oxford.