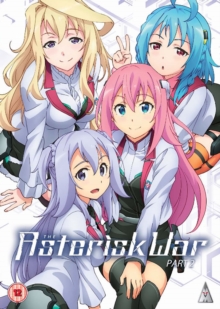 The next 12 episodes from the Japanese anime directed by Kenji Seto.

With the majority of Earth's major cities destroyed by the Invertia meteor storm, an unknown element allows the human race to develop superpowers and train to become warriors known as Genestella.

Struggling to compete at the Genestella tournaments, pupils from the Seidoukan Academy in the city of Asterisk do battle in a bid to earn the title of the school's top fighter.