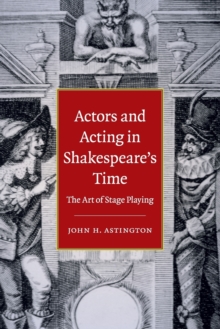 Actors and acting in Shakespeare's time : the art of stage playing

John Astington brings the acting style of the Shakespearean period to life, describing and analysing the art of the player in the English professional theatre between Richard Tarlton and Thomas Betterton.

The book pays close attention to the cultural context of stage playing, the critical language used about it, and the kinds of training and professional practice employed in the theatre at various times over the course of roughly one hundred years - 1558-1660.

Perfect for courses, this survey takes into account recent discoveries about actors and their social networks, about apprenticeship and company affiliations, and about playing outside the major centre of theatre, London.

Astington considers the educational tradition of playing, in schools, universities, legal inns, and choral communities, in comparison to the work of the professional players.

A comprehensive biographical dictionary of all major professional players of the Shakespearean period is included as a handy reference guide.