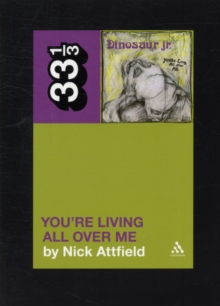 Dinosaur Jr.'s You're living all over me

This is an in-depth study of the visceral slacker classic from 1987, an album that influenced enormously the nascent alternative scene.

With battered guitar, bass, and kit, they carry around a catalogue of songs that betrays identities half-formed at best, schizoid at worst.

But listen. "1987", a new album, a snapshot of a moment when a furious musical intensity swung upwards and pushed their lyrics and Mascis' vocal whine far into the margins.

Searing riffs, mountainous solos, and the tightest of fills - underpinned by stream-of-consciousness structures and a palette of crazed effects - steal the show.

These three build a one-off sound that stirred up the hardening alternative mainstream and drove it to distraction. "You're Living All Over Me": supposedly Mascis' indictment of what it was like to tour in a van with these other two misfits, but also testimony to the obsession - an itch, a disease - that the band's disengagement from their world had produced.

This record cares so little it cares a lot. "33 1/3" is a series of short books about a wide variety of albums, by artists ranging from James Brown to the Beastie Boys.

Launched in September 2003, the series now contains over 60 titles and is acclaimed and loved by fans, musicians and scholars alike.

It was only a matter of time before a clever publisher realized that there is an audience for whom "Exile on Main Street" or "Electric Ladyland" are as significant and worthy of study as "The Catcher in the Rye" or "Middlemarch"..."The series, which now comprises 29 titles with more in the works, is freewheeling and eclectic, ranging from minute rock-geek analysis to idiosyncratic personal celebration". ("The New York Times Book Review", 2006).