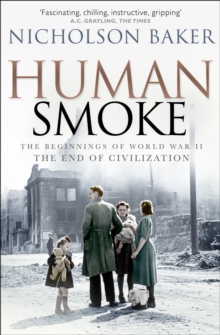 Human smoke : the beginnings of World War II, the end of civilization

At a time when the West seems ever more eager to call on military aggression as a means of securing international peace, Nicholson Baker's provocative narrative exploring the political misjudgements and personal biases that gave birth to the terrifying consequences of the Second World War could not be more pertinent.

With original and controversial insights brought about by meticulous research, Human Smokere-evaluates the political turning points that led up to war, challenging some of the treasured myths we hold about how war came about and how atrocities like the Holocaust were able to happen.

Baker reminds us, for instance, not to forget that it was thanks in great part to Churchill and England that Mussolini ascended to power so quickly, and that, before leading the United States against Nazi Germany, a young FDR spent much of his time lobbying for a restriction in the number of Jews admitted to Harvard.

Conversely, Human Smokealsoreminds us of those who had the foresight to anticipate the coming bloodshed and the courage to oppose the tide of history, as Gandhi demonstrated when he made his symbolic walk to the ocean.

Praised by critics and readers alike for his gifted writing and exquisitely observant eye, Baker offers a combination of sweeping narrative history and a series of finely delineated vignettes of the individuals and moments that shaped history.