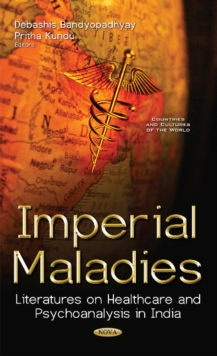 The thrust-area of this book is the connection between imperial anxieties and tropical health situations along with intriguing psychological questions involving race, politics, gender, history and colonial modernity.

For a long time, the focus has largely been Eurocentric: the effects of European medicine and healthcare policies introduced to the sub-continental colonies have been viewed in relation to the strategies of governing the colonial subjects.

David Arnolds Colonising the Body considers the States role in introducing European medicine as instrumental to the British imperial project in India.

In literary representations, especially in the Late Victorian and early twentieth century fiction and memoirs by Rudyard Kipling, Philip Meadows Taylor, Flora Annie Steel and George Orwell, we have several pictures of a palliative, medically-oriented imperialism.

Waltraud Ernsts Mad Tales of the Raj (1998) and Christiane Hartnacks Psychoanalysis in Colonial India (2001) offer thoughtfully documented analyses of the early developments of psychology and psychotherapy in colonial India.

Indian medical historians like Poonam Bala and Projit Mukharji question the tendency of looking at western medicine only in terms of monopoly and power.

However, the question of Indianness in psychoanalytic philosophy, trying to understand how the East hopes to locate Western psychoanalysis in a post-therapeutic journey, or how the anti-Oedipal or an-Oedipal manifests itself in Indian cultures of psychoanalysis, still remains an area demanding further attention.

The present volume seeks to understand such problems in colonial, medical and psychoanalytic discourses, from perspectives that are broadly interdisciplinary yet chiefly based on literary, historical and cultural studies.

Containing fourteen chapters, this book hopes to succeed in exploring the medical and fictional literatures of colonial and postcolonial India, both in English and other Indian languages. The book is divided into such sub-themes as: Psychoanalysis , psychopathology and the aesthetics of malady; Literature, medicine and healthcare in colonial India; Historical Studies; Studies in popular fiction: sensational psychiatry; Medicine, gender and colonial modernity.