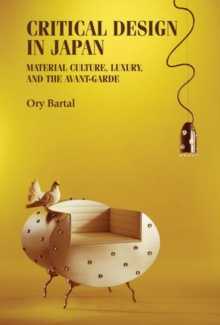 Critical design in Japan : material culture, luxury, and the avant-garde

By: Bartal, Ory (Head of the History and Theory Department)

Part of the Studies in design and material culture series

This book tells the story of critical avant-garde design in Japan, which emerged during the 1960s and continues to inspire designers today.

The practice communicates a form of visual and material protest drawing on the ideologies and critical theories of the 1960s and 1970s, notably feminism, body politics, the politics of identity, and ecological, anti-consumerist and anti-institutional critiques, as well as the concept of otherness.

It also presents an encounter between two seemingly contradictory concepts: luxury and the avant-garde.

The book challenges the definition of design as the production of unnecessary decorative and conceptual objects, and the characterisation of Japanese design in particular as beautiful, sublime or a product of 'Japanese culture'.

In doing so it reveals the ways in which material and visual culture serve to voice protest and formulate a social critique. -- .