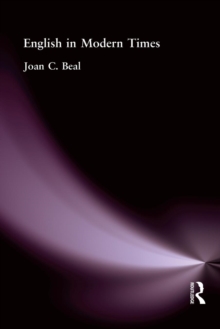 English in Modern Times describes the development of the English language from 1700 until 1945, and argues that it is in the course of this later modern English period that the characteristics of 'modern' English evolved.

This is the first undergraduate text to cover the whole of this important period, which has been called the 'Cinderella' of English historical linguistics because of its lack of representation in scholarly literature.

This book is sociohistorical in orientation, arguing that social changes in the Anglophone world need to be taken into account if we are to understand the linguistic changes that occurred during this period.

Further chapters deal with changes in vocabulary, syntax and morphology and phonology and with the attempts of lexicographers, grammarians and elocutionists to arrest and control these changes by codifying the language.

Unlike many earlier histories of English, 'English in Modern Times' does not define 'English' as confined to Standard (English) English, but also considers the development of extraterritorial Englishes and non-standard varieties of British English in the Later Modern period.