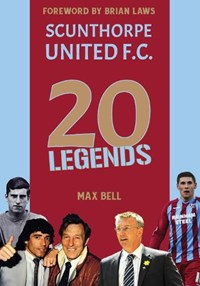 Which Scunthorpe defender was tapped up in the dressing rooms by Brian Clough?

Who helped get him changed on top of Princess Diana's car?What did the club's record goalscorer really think about the manager sacked in a promotion season?

How does it feel to miss a penalty at Wembley? Win the European Cup?And how on earth did a future England captain manage to break the club's tractor?Throughout their 120 year-plus history, Scunthorpe United have been many things...

From breath-taking cup upsets, to the raw ecstasy of promotion, the agonies of failure, lifelong friendships, boardroom coups, and good old-fashioned fallings-out; the people in the heat of the action spill the beans like never before. Each chapter tells a different story; focusing on a legend apiece from the club's history and sharing their adventures throughout the beautiful game.

Brian Laws also provides the foreword. If you really want to get under the skin of a brilliant, bonkers football club at the very heart of its community; then look no further than 20 Legends: Scunthorpe United.