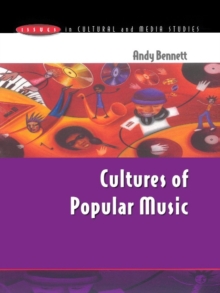 Part of the Issues in cultural and media studies series

In this lively and accessible text, Andy Bennett presents a comprehensive cultural, social and historical overview of post-war popular music genres, from rock 'n' roll and psychedelic pop, through punk and heavy metal, to rap, rave and techno. Providing a chapter by chapter account, Bennett also examines the style-based youth cultures to which such genres have given rise. Drawing on key research in sociology, media studies and cultural studies, the book considers the cultural significance of respective post-war popular music genres for young audiences, with reference to issues such as space and place, ethnicity, gender, creativity, education and leisure. A key feature of the book is its departure from conventional Anglo-American perspectives. In addition to British and US examples, the book refers to studies conducted in Germany, Holland, Sweden, Israel, Australia, New Zealand, Mexico, Japan, Russia and Hungary, presenting the cultural relationship between youth culture and popular music as a truly global phenomenon.