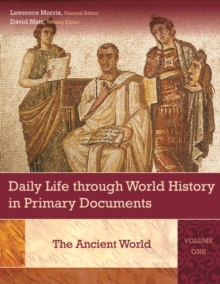 Who did the ancient Greeks describe as the world's best athlete?

What does the Koran say about women's rights? How has the digital revolution changed life in the modern age?

From the law courts of ancient Iraq to bloody Civil War battlefields, explore the daily lives of people from major world cultures throughout history, as presented in their own words.

Bringing useful and engaging material into world history classrooms, this rich collection of historical documents and illustrations provides insight into major cultures from all continents.

Hundreds of thematically organized, annotated primary documents, and over 100 images introduce aspects of daily life throughout the world, including domestic life, economics, intellectual life, material life, politics, religion, and recreation, from antiquity to the present.

Document selections are guided by the National Standards for World History, providing a direct tie to the curriculum. Analytical introductions explain the key features and background of each document, and create links between documents to illustrate the interrelationship of thoughts and customs across time and cultures.

Volume 1: The Ancient World covers the major civilizations from ancient Sumeria (3000 BCE) through the fall of Imperial Rome (476 CE), including Egypt, Greece, and Israel, and also covers China and India during the births of Hinduism, Buddhism, and Confucianism. Volume 2: The Middle Ages and Renaissance covers the development of European culture from the Germanic migrations of the fifth century CE through the university movement of the late middle ages, and the sixteenth-century growth of global empires and the collapse of the kingship in seventeenth-century England.

Also covered are the Native empires of the Americas and the rise of Islamic culture throughout the Middle East and Africa. Volume 3: The Modern World spans the period from the Enlightenment through modern Internet era and global economy, including the founding of the United States, colonial and post-colonial life in Latin America and Africa, and the growth of international cultures and new economies in Asia.

Document sources include: The code of Hammurabi, The Manu Smrti, Seneca's On Mercy, Josephus's Jewish Antiquities, The Koran, Dante's Divine Comedy, Bernal Diaz del Castillo's The True History of the Conquest of Mexico, The Travels of Marco Polo, Brahmagupta's principles of mathematics and astronomy, The Mayan Popul Vuh, the diary of a Southern plantation wife during the Civil War, and letters from an American soldier in VietnamThematically organized sections are supplemented with a glossary of terms, a glossary of names, a timeline of key events, and an annotated bibliography.

Document selections are guided by the National Standards for World History, providing a direct tie to the curriculum.

This collection is an invaluable source for students of material history, social history, and world history.