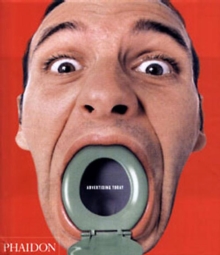 More than a means of moving merchandise, advertising has been increasingly recognized not only as an art form all its own, but also as a central, defining element of popular culture.

Together, the 14 chapters of Advertising Today provide a thematic overview of the evolution of advertising around the world over the past 30 years, charting influences from the political and social upheavals of the 1960s, to the appropriation of cinematic production techniques and special effects in the 1980s, to the influence of the Internet in the 1990s.

Advertising Today provides a lively, provocative, and comprehensive overview of the evolution of advertising around the world over the last thirty years. Over the course of 14 chapters, the book chronicles the rise of advertising as a bellwether of popular culture and as a new art form for our media-obsessed age.

Author Warren Berger makes the case that ads are a mirror of ourselves and our society - our desires, needs, material goods, and economic health.

In analyzing specific advertisements and ad campaigns from the 1960s to the present, the book simultaneously acts as a sort of history of global pop culture and a record of the social, cultural, and geo-political temperature-changes that affect the image-saturated environment around us.

The book reproduces more than 400 advertisements originally seen in a wide range of media, including print, television, billboards, the Internet, and even the very recent, so-called "guerrilla" advertising - in which practically anything (pieces of fruit, sand dunes on a beach, stenciled sidewalks) can act as a surface for promoting a product.

Each chapter also includes a sidebar interview with a key figure in the world of advertising. In an introductory chapter, Berger explains the concept of New Advertising and makes a general case for why advertising should be regarded as an important, influential form of communication.

Chapters are organized roughly chronologically by themes, beginning with the "Creative Revolution" of the 1960s, in which the ad agency Doyle Dane Bernbach introduced the dramatic, sophisticated new "Think small" ads for Volkswagen. Remaining chapters cover a wide range of trends and events, including the cinematic influences in the 1980s (now taken to postmodern heights with Gap khaki ads that knowingly quote American iconic dance styles and the film West Side Story); the way in which celebrity culture has invaded ads (with everyone from Michael Jordan to Hong Kong film stars to Gandhi and Picasso touting products); the influence of special interest groups and the marketing sophistication used to reach women and minorities; the "10 commandments" of advertising today (in which the message of empowerment is ever-present, and "the advertiser plays the role of preacher, therapist and cheerleader all in one"); and the evolution of ads from the hard-sell to a subtle message that plays to a generation concerned with all things hip, cool, and irreverent.

The book is truly international in scope, analyzing the advertising culture in countries around the world, including South Africa, Brazil, Australia, New Zealand, and Singapore. As an engaging portrait of the times, replete with fascinating characters and quixotic business dealings, this book will be essential reading for anyone interested in contemporary culture.