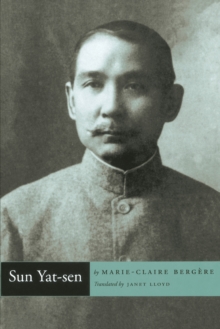 By: Bergere, Marie-Claire,  Lloyd, Janet(Translated by)

Sun Yat-sen (1866-1925), the first president of the Republic of China, has left a supremely ambivalent political and intellectual legacy so much so that he is claimed as a Founding Father by both the present rival governments in Taipei and Beijing.

In Taiwan, he is the object of a veritable cult; in the People s Republic of China, he is paid homage as pioneer of the revolution, making possible the Party s claims of continuity with the national past.

Western scholars, on the other hand, have tended to question the myth of Sun Yat-sen by stressing the man s weaknesses, the thinker s incoherences, and the revolutionary leader s many failures.

This book argues that the life and work of Sun Yat-sen have been distorted both by the creation of the myth and by the attempts at demythification.

Its aim is to provide a fresh overall evaluation of the man and the events that turned an adventurer into the founder of the Chinese Republic and the leader of a great nationalist movement.

The Sun Yat-sen who emerges from this rigorously researched account is a muddled politician, an opportunist with generous but confused ideas, a theorist without great originality or intellectual rigor.