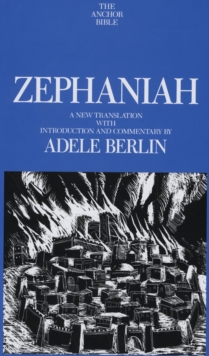 Zephaniah : a new translation with introduction and commentary

With keen insight and lucid analysis, Adele Berlin brings the dramatic words of the great prophet Zaphaniah to life.

Living under the tumultuous reign of King Josiah of Judah (640-609 BCE), Zephaniah predicted the final day of judgment when God would come to the fate of Israel and other nations.

The book of Zephaniah is composed as a charged dialogue between God and the prophet.

As their conversation unfolds, we learn of the doomed destiny which are indifferent to the Lord's power and of humans who have become too enthralled worldly riches.

As piercing as any modern day social critic, Zephaniah proclaims salvation only for those who lead a life of simplicity, faith, and humility.

The new translation by Adele Berlin, a literary as well as biblical scholar, celebrates the vivid and powerful language of this ancient poet.

In staccato exclamations, elevated rhetoric, and a rich tapestry of metaphors and similes, Zephaniah paints a world beset by corruption, idolatry, and war.

Berlin's contemporary commentary illuminates not only the beauty of Zephaniah's poetry, but also the political meaning behind his anguished verse For the biblical scholar, Berlin draws vital between Zephaniah's references and the rest of the Hebrew Bible.

For general readers, Berlin's accessible Zephaniah is an invitation to explore the political and socially turbulent times of this ancient prophet's world.