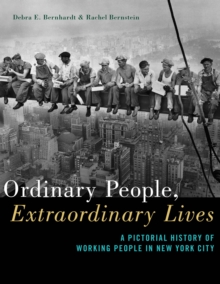 Brings to life the breathtaking and often heartbreaking stories of the workers who built New York City in the Twentieth CenturyOrdinary People, Extraordinary Lives tells the stories of the men and women who built the City-of towering structures and the beam walkers who assembled them; of immigrant youths in factories and women in sweatshops; of longshoremen and typewriter girls; of dock workers and captains of industry.

It provides a glimpse of the traditions they carried with them to this country and how they helped create new ones, in the form of labor organizations that provided recent immigrants, often overwhelmed by the intensity of New York life, with a sense of solidarity and security. Astounding in their own right, the book's photographic images, most drawn from seldom-seen labor movement photographers, are complemented by poignant oral histories which tell the stories behind the images.

Among the extraordinary lives chronicled are those of Philip Keating, who, seven years after a fellow worker photographed him painting the Queensboro Bridge in 1949, plunged to his death from another worksite; William Atkinson, who broke the color bar at Macy's and tells of fighting racism at home after fighting fascism abroad during World War II; and Cynthia Long, who fought gender barriers to become, in the late 1970s, an electrician with International Brotherhood of Electrical Workers Local 3. With narratives at the beginning of each section providing historical context, this book brings the past clearly, emotionally, and fascinatingly alive.