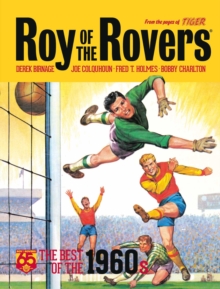 Celebrate 65 years of the greatest football comic ever!

They don't come much more iconic than Roy of the Rovers.

The Melchester Rovers striker of legend first appeared in 1954, and went on to become a genuine sporting hero for generations of fans, with his story spanning decades of footballing adventures. Celebrating 65 years of goals and glory in 2019, this second instalment in a spectacular new luxury series collects the very best Roy of the Rovers stories from that glorious decades of British football, the 1960s!THE MAN, THE MYTH, THE LEGEND!

League glory, European campaigns, foreign tours and a little thing called the World Cup are all on the horizon as Roy of the Rovers cements his footballing legacy. An icon of British comics and sporting history is born, with his origin presented in glorious hardback for the first time!