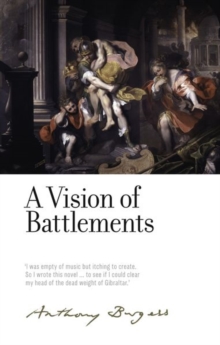 A vision of battlements

A Vision of Battlements is the first novel by the writer and composer Anthony Burgess, who was born in Manchester in 1917.

Set in Gibraltar during the Second World War, the book follows the fortunes of Richard Ennis, an army sergeant and incipient composer who dreams of composing great music and building a new cultural world after the end of the war.

Following the example of his literary hero, James Joyce, Burgess takes the structure of his book from Virgil's Aeneid.

The result is, like Joyce's Ulysses, a comic rewriting of a classical epic, whose critique of the Army and the postwar settlement is sharp and assured. The Irwell Edition is the first publication of Burgess's forgotten masterpiece since 1965.

This new edition includes an introduction and notes by Andrew Biswell, author of a prize-winning biography of Anthony Burgess. -- .