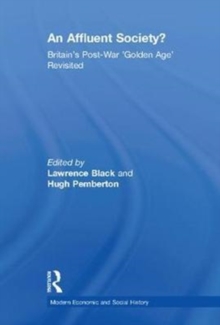 Part of the Modern economic and social history series

During an election speech in 1957 the Prime Minister, Harold Macmillan, famously remarked that 'most of our people have never had it so good'.

Although taken out of context, this phrase soon came to epitomize the sense of increased affluence and social progress that was prevalent in Britain during the 1950s and 1960s.

Yet, despite the recognition that Britain had moved away from an era of rationing and scarcity, to a new age of choice and plenty, there was simultaneously a parallel feeling that the nation was in decline and being economically outstripped by its international competitors. Whilst the study of Britain's postwar history is a well-trodden path, and the paradox of absolute growth versus relative decline much debated, it is here approached in a fresh and rewarding way. Rather than highlighting economic and industrial 'decline', this volume emphasizes the tremendous impact of rising affluence and consumerism on British society.

It explores various expressions of affluence: new consumer goods; shifting social and cultural values; changes in popular expectations of policy; shifting popular political behaviour; changing attitudes of politicians towards the electorate; and the representation of affluence in popular culture and advertising. By focusing on the widespread cultural consequences of increasing levels of consumerism, emphasizing growth over decline and recognizing the rising standards of living enjoyed by most Britons, a new and intriguing window is opened on the complexities of this 'golden age'.

Contrasting growing consumer expectations and demands against the anxieties of politicians and economists, this book offers all students of the period a new perspective from which to view post-imperial Britain and to question many conventional historical assumptions.