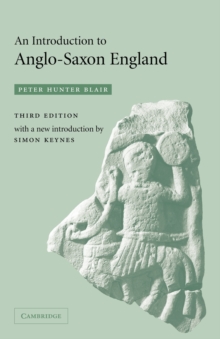 An Introduction to Anglo-Saxon England

Part of the Anglo-Saxon Studies series

This is a lucid, authoritative and well-balanced account of Anglo-Saxon history.

The third edition includes a new introduction by Simon Keynes.

Between the end of the Roman occupation and the coming of the Normans, England was settled by Germanic races; the kingdom as a political unit was created, heathenism yielded to a vigorous Christian Church, superb works of art were made, and the English language - spoken and written - took its form.

These origins of the English heritage are Hunter Blair's subject.

The first two chapters survey Anglo-Saxon England: its wars, its invaders, its peoples and its kings.

The remaining chapters deal with specific aspects of its culture: its Church, government, economy and literary achievement.

Throughout the author uses illustrations and a wide range of sources - documents, archaeological evidence and place names - to illuminate the period as a whole.

For this edition, Simon Keynes has prepared a thoroughly updated bibliography.