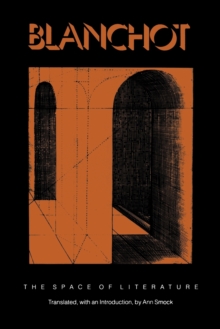 The space of literature

Maurice Blanchot, the eminent literary and cultural critic, has had a vast influence on contemporary French writers - among them are Jean Paul Sartre and Jacques Derrida.

From the 1930s through the present day, his writings have been shaping the international literary consciousness. "The Space of Literature", first published in France in 1955, is central to the development of Blanchot's thought.

In it, he reflects on literature and the unique demand it makes upon our attention.

Thus he explores the process of reading as well as the nature of artistic creativity, all the while considering the relation of the literary work to time, to history, and to death.

This book consists not so much in the application of a critical method or the demonstration of a theory of literature as in a patiently deliberate meditation upon the literary experience, informed most notably by studies of Mallarme, Kafka, Rilke, and Holderlin.

Blanchot's discussions of those writers are among the finest in any language. Ann Smock's fluent translation retains the tone and sense of the French; her introduction situates Blanchot in the French and American cultural spectrum and outlines the history of his critical concerns.