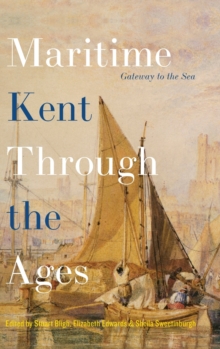 Maritime Kent through the ages : gateway to the sea

Kent, with its long coastline and its important geopolitical position close to London and continental Europe, and on major trading routes between Britain and the wider world, has had a very significant maritime history. This book covers a wide range of topics relating to that history from the earliest times to the present day. It sets Kent's varied coastline and waters in their geological and geographical context, showing how erosion and sediment deposition have contributed to the changing nature of maritime activities and populations. It examines Kent's strategic role in the defence of the country with the development and redevelopment of coastal defences, including four naval dockyards. It goes on to consider the supporting industries which grew up around the coastline, those which supplied raw materials and agricultural products from the county's hinterland, and its wider national and international trading links. It also discusses the diverse coastal communities of Kent and how they have changed in response to the demands of defence, trade, and changing population and migration patterns. In addition, the book includes detailed case studies which explore particular subject areas as exemplars of the major themes covered by the book.