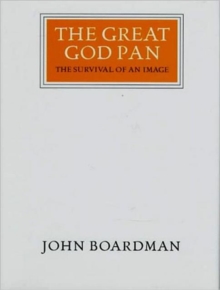 The great god Pan : the survival of an image

This work describes how the depiction of Pan and his familiar pipes developed and was adapted in later times.

Among the gods of classical antiquity, Pan - that distinctive figure combining the physical characteristics of man and goat - is one of the few to have retained a special place in the imaginations of writers and artists, even into modern times.

Whether viewed as a personification of country ways, equated with the excesses of Bacchic revels or treated as a demon figure, the presence of Pan was felt in the literature and art of antiquity, the mediaeval period and notably in Renaissance and later paintings.

More recently, in the 19th and 20th centuries, Pan's wild nature made him a popular figure for Romantic artists and writers and he also served as a medium for topical caricatures.

Although the ideas which Pan represented in ancient Greece and Rome may have passed into history, the image associated with his name remains as vivid as ever in the minds of modern man.