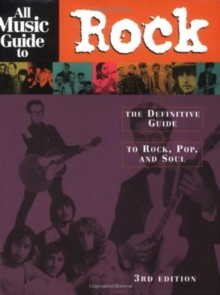 This well-respected reference has been completely updated, expanded, and revised to reflect the ever-evolving world of rock.

Compiled by dozens of noted music critics, this third edition reviews and rates more than 12,000 great albums by over 2,000 artists and groups, both mainstream and alternative.

A brief profile details each performer's career, while insightful reviews of top recordings help define the musician's artistic development and impact on rock.