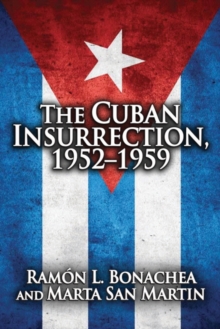 The Cuban Insurrection is an in-depth study of the first stage of the Cuban Revolution, the years from 1952 to 1959.

The volume depicts the origins of the conflict, details the middle years, and ends with Fidel Castro's victorious arrival In Havana on January 8, 1959.

Based on a wealth of hitherto unpublished original material, including confidential military reports, letters from various leaders of the insurrection and data gathered from interviews held In Cuba and abroad, the book Is a descriptive historical analysis of the struggle against military dictator Fulgencio Batista. The authors challenge the traditional premise that Cuba's insurrection began in the rural areas and only later expanded into urban areas.

Instead they argue that the insurrectionary struggle was based upon combined urban-rural guerrilla warfare against the regular army. Basically, The Cuban Insurrection treats two major movements involved in the struggle-The Directorio Revolucionario and the M-26-7-and examines the growth, ideology, conflicts, and military strategies of their respective rural and urban organizations.