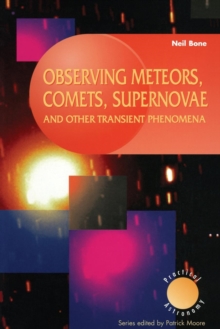 Part of the The Patrick Moore Practical Astronomy Series series

Transient phenomena are short-lived astronomical events, unusual in a science in which time is more often measured in millennia than milliseconds.

There is a fascination with transient phenomena, predictable or otherwise, that astronomers of all abilities share.

In Meteors, Comets, Supernovae, Neil Bone gives guidelines for observers, including the best possible periods (months or years) to see seasonal but unpredictable phenomena like meteors and sunspots.

Recording such outbursts involves visual observing techniques, photography, and even the relatively new field of the video recording of meteors, which are also examined in detail.

The book also includes material about phenomena that occur in the lower atmosphere (such as "ozone eaters", nacreous clouds, solar and lunar haloes), which although not strictly astronomical in their nature attract the attention of dedicated sky-watchers.