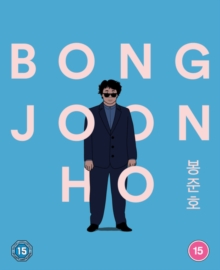 Meanwhile, Park Hyun-nam (Doona Bae) begins investigating when a number of canines are reported missing by residents of her apartment complex.

In 'Memories of Murder' (2003), set in 1986 in a small town in Gyeonggi Province, Detective Park Doo-man (Kang-ho Song) and his partner, Detective Cho Yong-koo (Roe-ha Kim), investigate the brutal rape and murder of two women discovered in a ditch.

They are aided in their investigation by Seoul detective Seo Tae-yoon (Sang-Kyung Kim), whose methods clash with Park's.

When another body is discovered it becomes apparent the detectives are searching for an elusive serial killer, and they find themselves investigating the deaths of ten women over the course of six years. 'The Host' (2006) follows snack bar owner Gang-du Park (Song) and his family as they are forced to fight back against a mysterious monster which emerges from the Han River in Seoul.

Fearing the worst after his daughter Hyun-seo (Ko Asung) is captured and carried away by the unidentified creature, Gang-du is left shocked when he receives a phone call from her explaining she is being held captive by the monster deep in the sewers.

Spurred on by Hyun-seo's unexpected call, Gang-du gathers together the remaining members of his family and bravely sets off into the sewers in a bid to rescue her.

In 'Snowpiercer' (2013), following a failed attempt to halt global warming that sparked a new ice age in 2014, the last humans on Earth circumnavigate the globe aboard the Snowpiercer train. 17 years on, with the train rigidly divided by class, the poor inhabitants of the train's tail section, led by Curtis (Chris Evans), decide to rebel and demand better treatment and living conditions.

After freeing security expert Namgoong (Song) and his daughter Yona (Asung), the band of rebels make their way to the front of the train in search of its creator, Wilford (Ed Harris).

Finally, in 'Parasite' (2019) Kim Ki-taek (Song) sees a way out of his struggling family's poverty when he is employed by the wealthy Park family to tutor their daughter Da-hye (Ji-so Jung).

He quickly ingratiates himself with the Park family and convinces them to employ the rest of his impoverished family disguised as his acquaintances.

However, their scheme to infiltrate the Park family's lavish life soon turns awry when their true identities come under scrutiny.