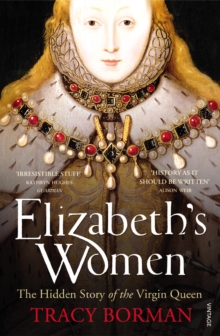 Elizabeth's women : the hidden story of the Virgin Queen

'History as it should be written' Alison Weir, bestselling author of the Six Tudor Queens seriesA groundbreaking and fascinating biography of England's most famous queen, viewed through the women who influenced her life. Elizabeth I is often portrayed as a ruthless 'man's woman', who derided her own sex - 'I know I have the body of a weak and feeble woman' - and loved to flirt with the young men at her court.

Yet she was born into a world of women and it is her relationships with these women that provide the most fascinating insight into the character of this remarkable monarch. As a child Elizabeth was raised by her mother, governesses and stepmothers, while as an adult she was clothed, bathed and watched by her ladies of the bedchamber and her maids of honour.

With them she was jealous, spiteful and cruel, as well as loyal, kind and protective.

Among her family it was her female relations who had the greatest influence on her life: from her sister Mary, who distrusted and later imprisoned her, to her cousin, Mary, Queen of Scots, who posed a constant and dangerous threat to her crown for almost thirty years. It was these women - and many more - who brought out the best - and worst - in Elizabeth and reveal the woman behind the carefully cultivated image of the Virgin Queen.