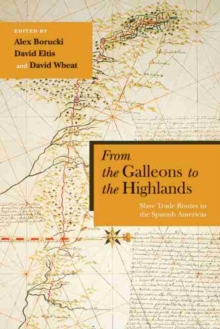 From the Galleons to the Highlands : Slave Trade Routes in the Spanish Americas

Part of the Dialogos series series

The essays in this book demonstrate the importance of transatlantic and intra-American slave trafficking in the development of colonial Spanish America, highlighting the Spanish colonies' previously underestimated significance within the broader history of the slave trade.

Spanish America received African captives not only directly via the transatlantic slave trade but also from slave markets in the Portuguese, English, Dutch, French, and Danish Americas, ultimately absorbing more enslaved Africans than any other imperial jurisdiction in the Americas except Brazil.

The contributors focus on the histories of slave trafficking to, within, and across highly diverse regions of Spanish America throughout the entire colonial period, with themes ranging from the earliest known transatlantic slaving voyages during the sixteenth century to the evolution of antislavery efforts within the Spanish empire.

Students and scholars will find the comprehensive study and analysis in From the Galleons to the Highlands invaluable in examining the study of the slave trade to colonial Spanish America.