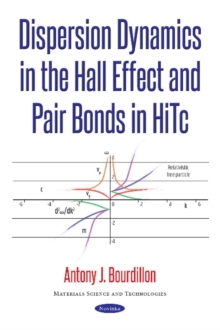 Dispersion Dynamics in the Hall Effect & Pair Bonds in HiTc

Dispersion dynamics are developed from the stable wave packet in wave mechanics.

They are used first in a physical treatment of creation and annihilation, and then applied to measurements in high temperature superconductivity.

The dynamics require that the negative energy solution to relativity equations implies negative rest mass in the antiparticle.

Diracs positive mass for his first order equation is inconsistent with dispersion dynamics.

The processing of the ceramic cuprates links the superconductivity not to the isotope effect, as in low temperature superconductors, but to chemical holes in the planar HiTc ceramics.

The Hall coefficient is negative in the former case, but positive in the latter -- even though the Lorentz force can act on neither voids nor immobile ionic nuclei.

Interpretation of the coefficient is an old anomaly.

In fact, whether in metals, in p-type semiconductors or in HiTc ceramics, the carriers are all negatively charged.

Dispersion dynamics show that the positive coefficient is a consequence of negative second derivatives in the dispersion of conduction bands in semiconductors, in certain metals and in high temperature superconductors.Existing data from HiTc compounds, especially data from processing, are reinterpreted to show how chemical and physical holes are formed.

The holes that are evident in the Hall effect at normal temperatures are readily available to bond with electron pairs at lower temperatures for superconductivity.

Wave functions in dispersion dynamics show how the conduction is non-resistive.

The book contrasts the two types of superconductivity while uniting the mechanism in them for non-resistive behaviour.