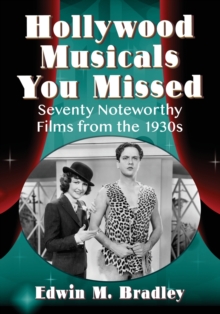 Musicals You Missed : Seventy Hollywood Gems of the 1930s

The early musical developed through tangents that reflected larger trends in film and American culture at large.

Here is a survey of select titles with a variety of influences: outsized songwriter personalities, hubbub over "hillbilly" and cowboy stereotypes, the emergence of swing, and the brief parade of opera stars to celluloid.

Featured movies range from the smash hit Alexander's Ragtime Band (1938), to obscurities such as Are You There? (1930) and Swing, Sister, Swing (1938), to the high-grossing but now forgotten Mountain Music (1937), and It's Great to Be Alive (1933), a zesty pre-Code musical/science-fiction/comedy mishmash.

Also included are some of the not-so-memorable pictures made by some of the decade's greatest musical stars.