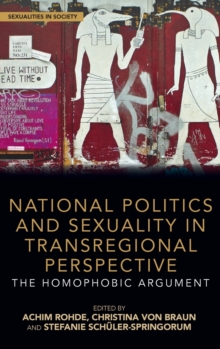 National politics and sexuality in transregional perspective : the homophobic argument

Part of the Sexualities in Society series

National Politics and Sexuality in Transregional Perspective explores how modern identity politics around the world are gendered and sexualized in multiple ways.

Constructions of the imagined collective "self" often contain references to a heteronormative order, whereas relevant internal or external "others" are often felt to deviate from this order through their gendered or sexual practices.

By contrast, some Western countries have witnessed the evolution of LGBTQI-friendly discourses by certain political actors in recent years, often in the context of the post-9/11 culture wars.

This pathbreaking book focuses on perceptions of "self" and "other" in Europe, the Middle East and North Africa from a gendered perspective.

It deals with anti-LGBTQI as well as LGBTQI-friendly aspects of modern culture and politics in countries within these regions, focusing on the functions such discursive markers play in nationalist and racist imageries, in discourses legitimizing class differences from the nineteenth century to the present day, including globalized discourses in the context of 9/11 and its aftermath.

It shows that discourses on sexuality and gendered performances in everyday life often undermine the stability of such binary constructions, as they point to the multiplicity, ambivalence and the indeterminate character of individual and collective identities under conditions of modernity.

Addressing contemporary identity politics both in a wider historical context and within a transregional comparative framework thus helps to discern differences and similarities between different world regions and serves to dislocate essentialized notions of cultural differences based on gender and sex.

This book will appeal to those with an interest in Political Sociology, Gender Studies, and Globalisation.